Rising ocean levels. Whole species going extinct. Destruction of the environment. You may have heard about something called climate change, but what exactly is it? Well, today you’re going to find out.

Climate change is the effects of global warming (the warming of the planet) such as shrinking glaciers, rising sea levels, ice melting and changes in the times flowers and plants bloom. All of these things will heavily affect future generations and the planet.

Does this sound that bad to you? Well, if the answer is no, I’m afraid that you’re very wrong. Climate change will cause intense heatwaves, regular wildfires and an increase in the intensity of tropical storms. This will cause havoc in places that are already affected by these types of natural disasters. Different places will be affected differently by climate change, but it will vastly change our planet. Changes have already been occurring! For example, Western Australia has experience a decrease in rainfall since the 70s and Greenland’s ice is melting. Scientists predict that global temperatures will rise for decades, so if we don’t do something about climate change soon, our planet will be greatly changed.

It’s not just humans who are going to be affected, it’s animals and plants as well! It is predicted that unless we stop or reduce our greenhouse gas emissions, a quarter of animals and plants could go extinct. Climate change would also affect what time of the year birds lay their eggs at and mammals would come out of hibernation earlier. It would also affect animals who migrate as their migration paths can be destroyed by humans and the effects of other animals and plants dying off. Many animals’ habitats would become uninhabitable because of environmental change (ice melting, loss of plant or animal species, pollution, deforestation etc.). Some animals may not be able to migrate fast enough or adapt to new climates which would cause entire species to die out.

Websites that I used:


adopt your own virtual pet! 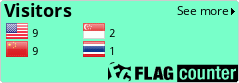